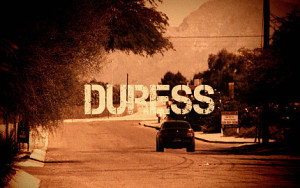 Every so often, life deals you a blow that can be crippling, and not necessarily in a metaphorical way. But with that blow, another door opens and it is incumbent on you to head through it as opposed to withering away in sorrow and anger. Speaking from experience, this is how this writer ended up in the place he finds himself, faced with a life altering event, the old life was over, a door opened to write a film and there was really nothing to do but go through it. Luis Pimber was faced with a similar situation when he was injured while working as a Tucson police officer in their undercover drug enforcement unit. He was injured to a degree that he could not return to his position, so thus comes forth a new opportunity, and he has taken it. He recently completed his first short film collaboration called Duress, which is largely based on his experiences working undercover on the drug scene in Tucson. It is a tension filled, chaotically psychological, and ultimately entertaining piece that has a real chance at becoming a larger work in time.

A photograph of the undercover personas of Luis Pimber, at right, and his partner, at left:  Photo
Courtesy Luis Pimber

The genesis of the project came as Pimber had an idea for a pilot based on the experiences he had as an undercover officer on the narcotics beat here in Tucson. So he started doing short stories about these experiences, coming upon James Bretney who encouraged him to continue with his writing, to keep pursuing this idea, and that if he did, it would come to fruition. So Pimber, who executive produced and co-directed the film with Bryant Stott took one of his experiences and converted it into a piece the scope and length of a television pilot. After careful consideration, he chose to whittle the story down to a 15 minute short film instead, having Stott take his ideas and craft them into a screenplay. And realistically, it does not seem after the several viewings done by this writer that it loses anything in the shorter format. In fact, it may even work better in a lot of ways, maintaining the tension especially.

Production still from Duress featuring Luis Pimber as Santiago and Antonio Guzman as Booda, who is seated:
Photo by Ben Braten

Pimber certainly had purpose with his piece, as he said that he was hoping to showcase the danger involved with being an undercover agent, as well as the bravery of those agents that show integrity through their work. As was mentioned earlier, injuries sustained by Pimber pushed him to a medical retirement, which was certainly instrumental in the journey of finding his current path. He started doing technical consulting work for local films, one of them he was an actor in as well, Sexo en Paraiso, and he began realizing he wanted to do a project of his own. Once again, he pointed to James Bretney and another collaborator, his co-director and writer Bryant Stott for providing the push to keep pursuing his idea on to completion. One of the refreshing things found while interviewing Pimber was his genuine desire to credit those who really helped him achieve what he had hoped to do, including Bretney, Stott, the director of photography Ben Braten, executive producer Cindy Pimber, Jon Proudstar, the actors and crew, and the local music talent who helped him to find his passion and contributed so much to the film.

Luis Pimber as Santiago in Duress:  Photo by Ben Braten

The film itself features Marco, based on Pimber and played by Elliot Ruiz, as an undercover narcotics officer trying to make a buy to catch the dealers he has ingratiated himself with on a bust. The inherent dangers in this field present themselves clearly and at proper intervals within the narrative. Marco finds himself at a point in the buy that he has hoped for when a wild card, crazy Jimmy played by Andrew McLaren brilliantly, enters the equation as it often does in these situations. The piece is quite accomplished for a first short film and it provides a definite sense that real growth and promise is possible for Pimber. This is all an independent filmmaker can ask for from him or herself; put yourself in position to get your vision out there and see what happens.

Pimber is currently doing work as an actor on numerous productions while continuing work on his own projects as well. He said that he has begun doing some work with a Tucson production company, 7th Floor Films’ Donnie Dains, as well as Jorge Luis Urbina who is one of the most talented cinematographers in Tucson according to many of this writer’s sources. You can find more information abut Pimber’s other work below and also, you will be able to see his acting chops and technical advising prowess in the upcoming film Sexo en Paraiso, which will be screening soon at The Loft Cinema.